Like I mentioned in my first post about Tokyo, Japan, we had about four full days to explore the city. It was EXHAUSTING to say the least. We walked about an average of 13 miles a day… I’d definitely wear some good walking shoes if you’re planning on doing a lot of sightseeing in Tokyo.

Right after arriving in Japan, we took the subway straight to Asakusa Station. I was exhausted from our early flight (7am), but thankfully there is no time difference between Japan and Korea so I drank a lot of coffee the first day. I enjoyed walking around the Sensoji Temple area. There were many cute shops, cafes, and restaurants around the temple.

We rented kimonos from Sakura Photo Studio. The people there were lovely and spoke English and Korean. It was a bit pricey, but honestly, TOTALLY WORTH IT! We only rented “basic” kimonos and I got my hair done. You’re able to mix and match colors and patterns for your full kimono outfit as well. If you don’t know what to do, the workers will help you come up with a great style. We didn’t opt for photos in the studio and just took some ourselves. They even had a few larger sizes for people like me who don’t know when to stop eating hahaha. I give Sakura Photo Studio a 9/10.

*WARNING* Wearing a full kimono is TIGHT AF. There are multiple layers and lots of tightening of strings, so you might have difficulties sitting down and breathing. 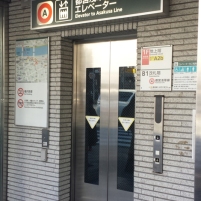 I originally took the photo so we could remember where we came out of since we were storing our luggage in a locker near this exit. 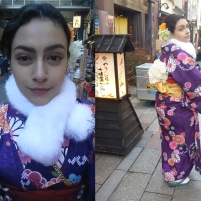 Only posting photos of me because hubbs doesn’t want his face shown. 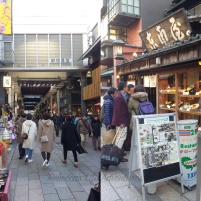 Walking around near the temple. I couldn’t post any temple pics because my husband is in them and he doesn’t want to be shown.

I wasn’t that impressed with this area to be honest. There are a lot of cute and unique cafes and restaurants, but it felt like any other artsy town. Also, when you hear about Harajuku, you think about people dressed up in cool, funky, unique outfits, but we didn’t really see anything out of the usual. Just a few people doing their thing. It’s a place you can visit in a day with no problem. I wouldn’t even stay there for a full day. You could stay for a bit and then walk on over to Meiji Shrine, which is right next to the neighborhood. To read more about that place, you can check out my first post about Japan here.

Didn’t actually go here even though it’s famous. I heard the animals aren’t treated well, so we decided not to go inside.

People who are way cooler than me.

We hit up the famous Shibuya Crossing and I had no idea. Many intersections are busy in Tokyo and I had NO IDEA where I was half of the time, so often I’d turn to my husband and ask, “Is this Shibuya Crossing!?” Eventually I gave up and stopped asking. We hadn’t planned on going there the first day, but we decided to walk there from Roppongi Station. It was tiring, but it was nice to see the area especially at night when all the building lights are lit up. 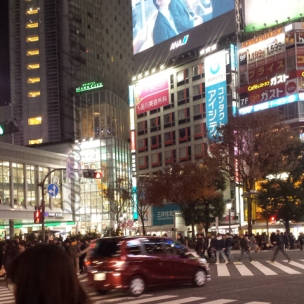 Of course I had to stop by the Hachiko Memorial Statue. I was so excited! I wanted to take pictures there, but many people were there as well so we took them quickly. Sadly most of them came out blurry. My husband didn’t understand why I was so excited, but it’s somewhere I had always wanted to visit.

We also stopped by a takoyaki (chopped up octopus in fried dough balls) stand. It’s a pretty famous takoyaki chain called Gindaco. I’ve had it before in Korea, but it was so much better there! Maybe it was the seasoning or maybe it was just the atmosphere I was in, but it was the best takoyaki that I’ve ever had. I definitely recommend checking that chain out! I give it a 10/10 for sure!

These places were really great to visit. I’d hit up Asakusa and Shibuya again in a heartbeat! We didn’t really have enough time to visit those neighborhoods in detail, so I’d like to explore some more of the area. Come back in a week or so to check out Part 3 of my Throwback Thursday Japan Series!

All of my reviews are based off of my own experiences. I’ll never give a high rating on a place or product if I don’t like it. Even if it’s a popular place or product, I’ll still call it like I see it. If you wan’t to have a discussion about the place or product or have questions, leave a comment below or write a message to me on my contact page.

Had a lovely day yesterday with @orangepop606 From UofM to Korea, so glad we've been able to stay close and in touch ❤❤❤ I can't wait to see what great things your new job will bring you! #Seoul #Hapjeong #Selca #selfie #igdaily #instasize #셀스타그램 #셀카 #셀피 #친구스타그램 #친구이랑 #인스타사이즈 #서울 #합정
Made it to LoL Park today for their Invade Art exhibition!!! It's so cool! If you're a lover of #leagueoflegends and #art you should have visited. Today is the last day! 😣 #SouthKorea #Seoul #LolPark #LoLGaren #LoLArt #instasize #igdaily #photoset #롤인베이드아트 #리그오브레전드 #데일리 #인스타사이즈 #서울 #아트 #아트그램
Today is my grandpa's funeral in the US. It's so hard not being there right now. I wish I could have said goodbye properly, but I'm happy that I was able to talk to him on Christmas and a few hours before his passing via video chat. My heart hurts for a variety of reasons, but I also know that death is a part of life. Until we meet again ❤ #grandpa #abuelo #goodbye #restinpeace #family #familia #vayacondios
Haven't posted in a long time and to be honest, I'm so shock I was able to do this 😂😂😂 Thank you to my dance teacher for encouraging me! I'm still working on becoming healthier and more active. Sometimes it gets discouraging especially when you read about and see so much fatphobia. I have my own demons to battle too when it comes to self image and even posting these pics permanently on my ig and not just story was a huge challenge for me. To all my thicc peeps, keep up the good fight! Be happy! Be healthy! Be you! #poledancing #headstand #poledancekorea #fitnessmotivation #flexibilitypractice #lifeinKorea #Incheon #poledance #poleheadstand #bodypositivity #bodypositive #thickfitchick #thickwomen #thicc #thiccthighssavelives #doyourthing #igdaily #photoset #instasize #폴댄스 #물구나무 #무서워 #인스타사이즈
Follow Rebecca's Life Adventures on WordPress.com